In a departure from what our team has done in past years, today we ventured into Nicaragua’s “high country” to visit Young Life’s national camp, called La Finca (The Farm). We were privileged to travel with a select group of Young Life leaders from Managua, several of which were former Oasis de Esperanza students and who still work with Young Life (Vida Joven) that meets at the school. We were also joined by three Oasis teachers, Nate, Carlos, and Alvaro, to strengthen the ties between the school and Young Life.

We all piled into the same bus and headed north past Lake Managua and into the hills to the north. The mountains here reach to 4000 to 5000 feet and grew greener and more spectacular the closer we got to La Finca. Our team and the YL leaders (about 20 in all) were in a jovial mood and much laughter prevailed on the 3-hour trip, some of which was up extremely steep hills. This is the heart of Nicaragua’s coffee region, and coffee plantations and processing facilities were present in abundance.

Departing from the bus, our group was greeted with refreshingly cool air and misty skies. The cloud forest in Nicaragua is a perpetual respite from the heat of the lowlands. Many of the Managuans were chilly, but it felt great to us from Lake City! The La Finca grounds can only be called spectacular. Everything is beautifully groomed, and of course, flowers bloom year-round. In this park-like setting are tremendous facilities for visiting campers. Included is a baseball field, soccer field, basketball court, and a lake for canoeing. Multiple buildings dot the camp, which can serve about 400 persons. A large group was there for the day when we arrived, and the numbers of people milling about made it feel very much like a college campus.

After unloading our gear in our dorm rooms, we headed to a filling lunch and then hiked as a group on one of the camp’s trails, ending at a hedge labyrinth in which we all contemplated the question of the one thing we most needed from God. It was a good exercise, and a lovely place for such contemplations.

The remainder of the afternoon was “chill time” for most of us, and we all enjoyed conversation or just soaking in the coolness and the greenery of the place. After dinner, we experienced a Vida Joven Club, similar in format to the Club we visited at Oasis de Esperanza the previous night. After some silly icebreaking actiivities, Todd spoke to the group of leaders, with Jhonny translating, on the importance of allowing ourselves to be loved by God instead of merely working “for” Him. Some great discussion ensued in groups of three persons, and then we retired to what we thought was the end of the day with Spanish praise songs around a bonfire.

The surprise, though, was a surprise! After the bonfire, the whole gang completely surprised Todd with a party celebrating his 30 years of service with Young Life. There was music, cake, soda, and even a pinata! It was a perfect way to close this day in fine Young Life fashion. Thanks, Todd, for all that you have done in Young Life and on this trip!

We’re spending tonight here and half a day tomorrow, when we will get back on the bus to Managua. Our trip is one-half over, but plenty of adventure is yet to come! 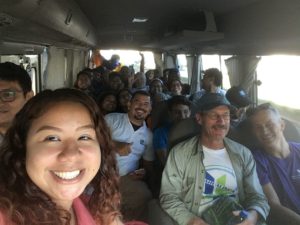 How many Vida Joven leaders plus our team can you put in a bus? A bunch! 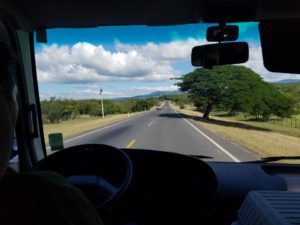 The countryside turns beautiful not far out of Managua. 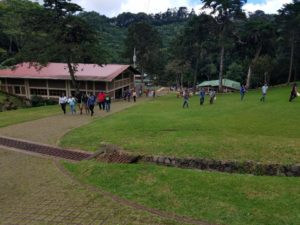 At about 4000 feet in elevation, La Finca camp is always cool and meticulously kept up. 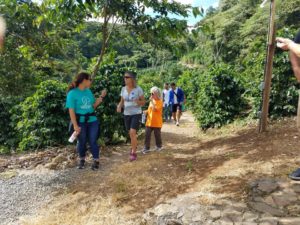 On the trail at La Finca. Elsa, Marcia, and Caron. 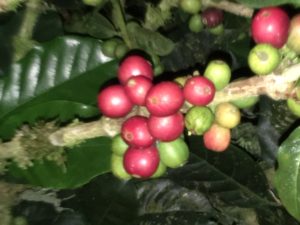 Coffee lovers will appreciate that La Finca grows its own coffee beans! Apparently these beans are ripe. 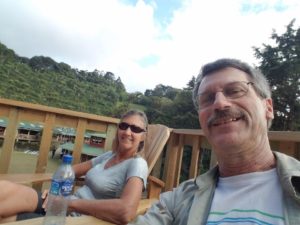 Marcia and Lyn having a hard afternoon. 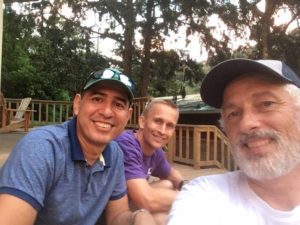 Nate and Todd spent time with the head of Vida Joven over all of Nicargua. 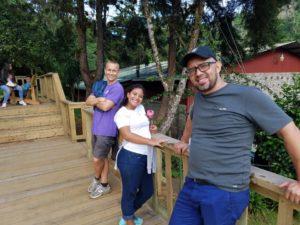 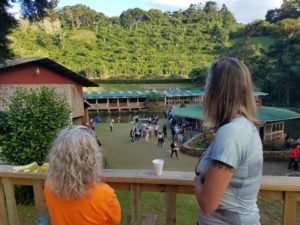 Caron and Marcia enjoy the view as the sun sets. 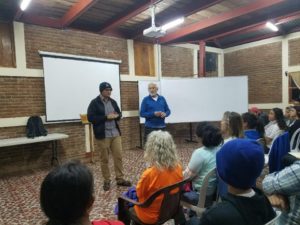 Todd spoke and Jhonny translated at the evening meeting. Little did Todd know what would come shortly!

A bonfire and praise songs ended the day until….. 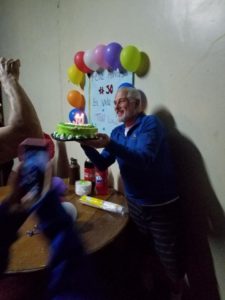 we all surprised Todd with his 30th YL anniversary party! Well done, Todd. 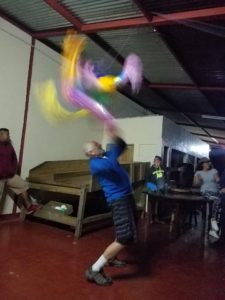