Wow, what a celebratory, activity-filled day this was! Our goal was to treat the hardworking staff of Oasis de Esperanza school to a refreshing “play day” to mark the end of their school year, and we believe that we succeeded! These dedicated people serve day after day among the children of some of the poorest people in the Western hemisphere, and deserve acknowledgement, care, and rest.

Our team van met up with a small “Coaster” bus that had already picked up the school staff, and we were off at about 9:00 AM. Our destination was the area of Granada, about an hour south of Managua. After many miles through the country, we turned off of the main road an began a steady climb. Before long, we were winding through the lovely mountain village of Catarina, which is famous for its flowers. And indeed, potted plant sellers lined the road for what seemed like a couple of miles! It was like driving through the world’s largest nursery, with all kinds of plants available.

But what Catarina is best known for is its dramatic view, which suddenly opens up at the far end of the town.Here, hundreds of feet below, is a large lake called the Apoyo Lagoon. If you have seen Crater Lake in Oregon, you get the idea. The Apoyo Lagoon lies in an extinct volcano crater, or caldera.Its shores are heavily forested and the view extends beyond to Lake Nicaragua, the city of Granada and Mombacho Volcano. Of course, we took plenty of photos before we moved on, but the view here could keep you captivated for hours

A few miles farther, we came to our next attraction, the Mirravallle Canopy Tour, a fancy name for a multiple-leg zipline. Not all of the staff elected to do the zipline but all or our team did. After climbing up an incredibly steep road in an army-style open-air transport and then some basic instruction, we were off! Lots of screams and laughter echoed through the forest, which may have frightened off any howler monkeys that were supposed to inhabit the area. After completing our 11 segments from tree to tree, we were more than ready for a meal, so we headed on down to the historic town of Granada.

Granada was founded in the 1500s by the Spanish and still retains a colonial feeling with blocks and blocks of colorfully-painted residences and cathedrals that are are more reminiscent of the Old World than the New. Our destination was the less-historic Kathy’s Waffle House, Wayne MaGouirk’s favorite restaurant in Nicaragua. Having received a call from us earlier, Kathy’s had a long outdoor table for 34 ready when we arrived! Before we were served, each of our team members was able to give some heartfelt encouragement to the staff for the important work that they are doing. Lyn was also able to share how much their ministry had even impacted the people of Lske City, many of whom give faithfully to the support of the Nicaraguan mission. When the food was served, everyone enjoyed a great meal and informal fellowship, language barriers notwithstanding.

We all came back to Managua at about dusk. Marcia and Caron elected to take the evening off, but Todd, Lyn and Jhonny rode our van back to Oasis de Esperanza school for the weekly meeting of Vida Joven, or Young Life. There we were warmly welcomed and had tons of fun with student-led activities and skits. At the conclusion, a great Gospel lesson was shared by yet another student. The three of us who went felt like the time was very well spent.

Was the day a success? Yes! We were privileged to play and eat and celebrate with our brothers and sisters serving at Oasis de Esperanza school. In the end, the smiles and laughter were all that we needed to know that our goal for this special day had been realized.

Tomorrow and Sunday, we will do something we’ve never done here before: visit the national Nicaragua Young Life camp in Matagalpa, about three hours away! Stay tuned, as we are not exactly sure of internet access when we get there. At worst, this blog will pick up again on Sunday evening.

More than usual photos appear below from this fun-filled day. Enjoy and thank you so much for your continued prayers! 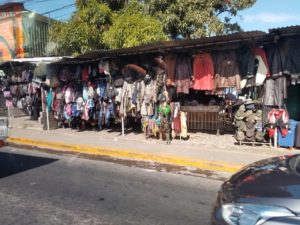 Managua has simply hundreds, if not thousands, of streetside shops similar to this clothing store. 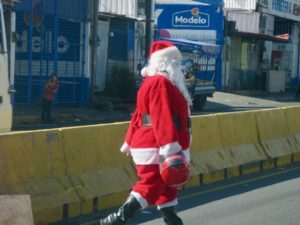 We found Santa Claus patrolling the streets of Managua!

Marcia, Caron, Lyn and Todd in front of the view of the crater lake, Apoyo Lagoon. 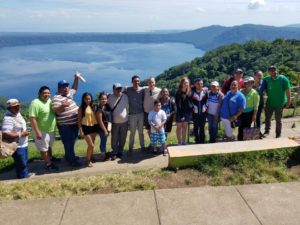 All of the Oasis de Esperanza staff at Catarina. 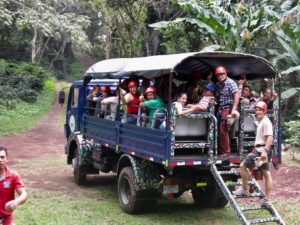 Heading up Mombacho Volcano for zipliing. 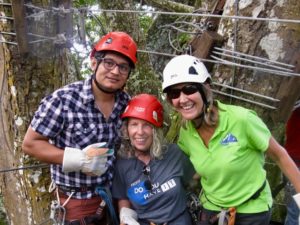 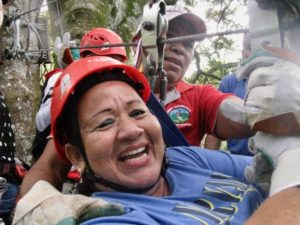 Jedidah having a good time! 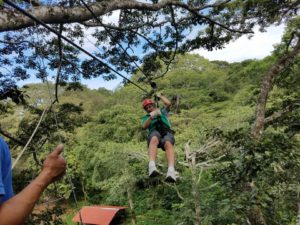 Todd on one of the eleven legs of the canopy tour. 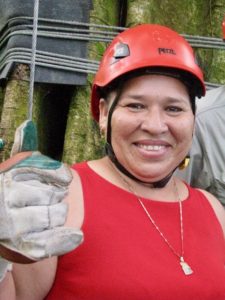 Sadia, not in the kitchen! 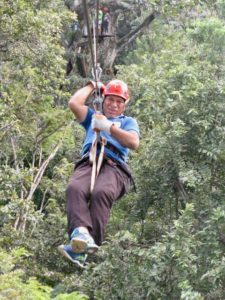 Arturo on the move! 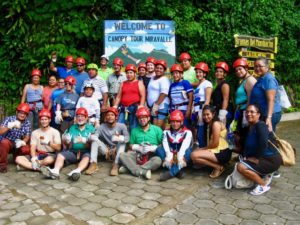 The bunch of us at the zipline. 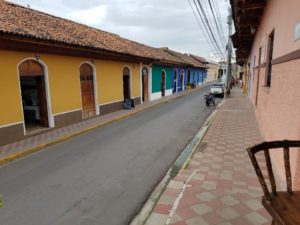 Todd says some words before lunch at Kathy’s.

Nate, Todd, Alvaro, and Arturo just hanging out at a Granada Cathedral. 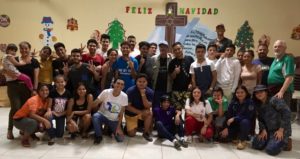 Vida Joven at Oasis de Esperanza in the evening. 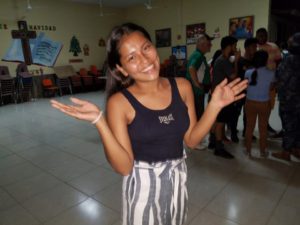